Yulia Drukh got her first clarinet lesson at the age of 8 in St.Petersburg (Russia). From 2005 to 2011 she studied also in St.Petersburg by A.Tichonov and A.Kazakov. In November, 2006 she won the 1. Price by the First International Clarinet Competition in Petrozavodsk (Russia). During the studies she collected experience qua Solo and Chamber musician, where she performed by the festivals of the St.Petersburger House of Music Young artists of Russia and River of talents.

Since 2011 she continued her academic studies in the High School of Music in Karlsruhe (Germany) by W.Meyer, where she successful finished her studies in 2013 with a Masterdiploma. Moreover, she continues to attend to different mastercourses, as well as with professors H.Schwimberghe, H.D.Klaus, L.Ruiz-Ferreres, R.Manno, S.Meyer and R. Wehle, C.Neidich, S.Kam etc.

Amongst other things, she was awarded the DAAD prize for foreign students (HMDK Stuttgart, Germany 2020).

Since 2015 she has continued her postgraduate studies at the Stuttgart University of Music and Performing Arts with Professor Norbert Kaiser, which she completed with distinction in 2021 (first Master New Music, then Konzertexamen / Soloist Class). There she also studied saxophone as a subsidiary subject (elective) with Ekkehard Rössle.

Among other things, she was an intern at the SWR Symphony Orchestra (2019/2020 season), had a temporary contract as deputy clarinetist at the Düsseldorfer Symphoniker (2020/2021 season), and occasionally plays as a temporary worker at the WDR Funkhausorchester, the WDR-, NDR- and SWR radio-orchestras and has a solo-position in the Osnabrück Symphony Orchestra from the 2021/2022 season.

She performs domestically and abroad as a soloist and chamber musician. In addition, she is actively involved in the organization of the Festival Zeitlose Musik and, from 2021, she  teachs practice of new music at the Highschool of music and arts in Stuttgart. She is one of the few clarinetists who outstanding play both clarinet systems – French and German. 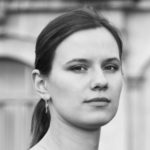